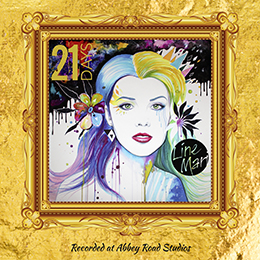 After being approached by major Abbey Road Studios producer. ‘… her magnificent voice that just makes you melt from the first verse she sings’ – Wolf in a Suit
Norwegian pop sensation Line Mari is set to release her debut album ’21 Days’ on the 4th November after being approached by major music producer Rob Cass. He saw her potential and invited her over to Abbey Road Studios where she began working on her debut album, with the help of cutting edge producer Pearse MacIntyre.

Line Mari dreamt of being a musician from birth, dancing in the womb as her mother explains. Although shy at first, by the time she was in her teens Line Mari was writing her own songs and performing. Her shyness has fuelled her songwriter, making her lyrics more personal, emotive and introspective.

Critically acclaimed previous singles ‘Crush’ and ‘Haters’ from the upcoming album were mastered by studio engineer Christian Wright who has worked alongside some of the biggest names in the pop and rock industry including Ed Sheeran, Keane, Eliza Doolittle and Blur. Bursting with fresh young vibes ’21 Days’ demonstrates Line Mari’s powerful and distinctive vocals whilst still having a rock infused edge.